The Foodie & the Fotographer : Champaner & The Glory that Surrounds It. 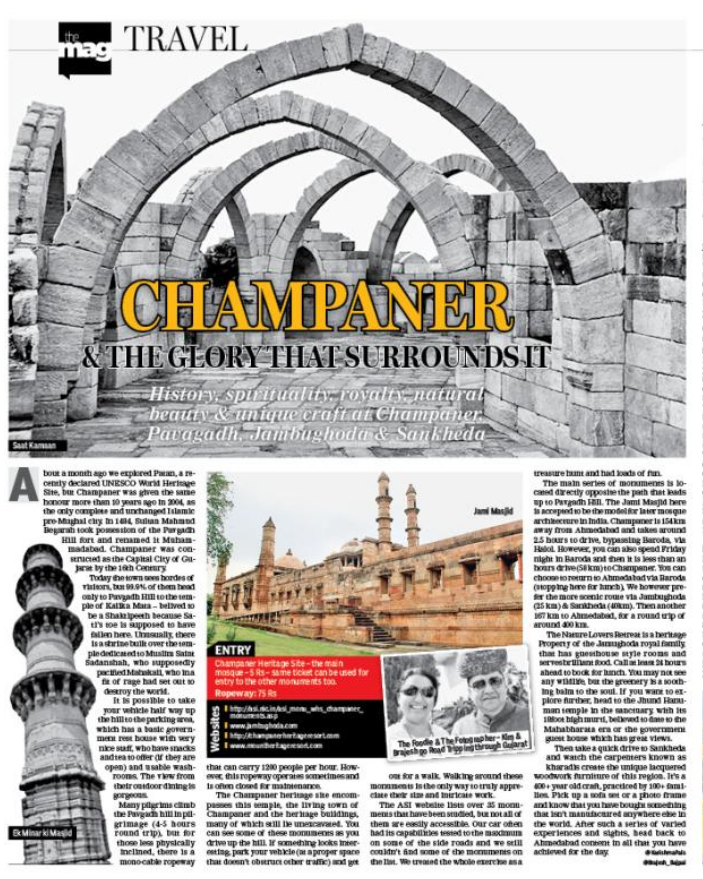 A Month Ago, (DNA, 16 Oct 14) we explored Patan, a recently declared UNESCO World Heritage Site, but Champaner was given the same honour more than 10 years ago in 2004, as the only complete and unchanged Islamic pre-Mughal city.

In 1484, Sultan Mahmud Begarah took possession of the Pavgadh Hill fort and renamed it Muhammadabad. Champaner was constructed as the Capital City of Gujarat by the 16th Century.

Today the town sees hordes of visitors, but 99.9% of them head only to Pavgadh Hill to the temple of Kalika Mata – belived to be a Shaktipeeth because Sati’s toe is supposed to have fallen here. Unusually, there is a shrine built over the temple dedicated to Muslim Saint Sadanshah, who supposedly pacified Mahakali, who in a fit of rage had set out to destroy the world.

It is possible to take your vehicle half way up the hill to the parking area, which has a basic Government rest house with very nice staff, who have snacks and tea on offer (if they are open) and usable washrooms. The view from their basic outdoor dining is gorgeous and with a steaming cup of tea and piping hot pakodas, you can forget the world and the crowds outside.

Many pilgrims climb the Pavgadh hill in pilgrimage (4-5 hours round trip), but for those less physically inclined, there is a mono-cable ropeway that can carry 1200 people per hour. However, this ropeway only operates in certain seasons and is often closed for repairs and maintenance, so be prepared for that eventuality.

The Champaner Heritage Site encompasses this temple, the living town of Champaner and the Heritage Buildings spread all over the area, many of which still lie unexcavated. You can see some of these monuments as you drive up the hill. If something looks interesting, park your vehicle (at a proper space that doesn’t obstruct other traffic) and get out for a walk. Walking around these monuments is the only way to truly appreciate their size and intricate work.

The ASI Website lists over 35 monuments that have been studied, but not all of them are easily accessible. Our car often had its capabilities tested to the maximum on some of the side roads and we still couldn’t find some of the monuments on the list. We treated the whole exercise as a treasure hunt and had loads of fun.

The main series of monuments is located directly opposite the path that leads up to Pavgadh Hill. The Jami Masjid here is accepted to be the model for later mosque architecture in India. Some of these Historic sites, now house Government offices. If you ask nicely, they will let you take a walk around their premises.

Champaner is 154 km away from Ahmedabad and takes around 2.5 hours to drive, bypassing Baroda, via Halol. However, you can also spend Friday night in Baroda and then it is less than an hours drive (58 km) to Champaner. You can choose to return to Ahmedabad via Baroda (stopping here for lunch), We however prefer the more scenic route via Jambughoda (25 km) & Sankheda (40km). Then another 167 km to Ahmedabad, for a round trip of around 400 km.

The Nature Lovers Retreat is a Heritage Property of the Jamughoda Royal family, that has guesthouse style rooms and serves brilliant food. Call at least 24 hours ahead to book for lunch. You may not see any Wildlife, but the Greenery is a soothing balm to the soul. Next time we may try the recently opened Champaner Heritage Resort or the Mount Heritage Resort. If you want to explore further, head to the Jhund Hanuman temple in the sanctuary, with its 18foot high murti, believed to date to the Mahabharata era or the Government Guest House which has great views of the reservoirs.

Then take a quick drive to Sankheda and watch the carpenters known as kharadis create the unique lacquered woodwork furniture of this region. It’s a 400+ year old craft, practiced by 100+ families. Pick up a sofa set or a photo frame and know that you have bought something that isn’t manufactured anywhere else in the world.

After such a series of varied experiences and sights, head back to Ahmedabad content in all that you have achieved for the day.

Entry
Champaner Heritage Site – the main mosque – 5 Rs – same ticket can be used for entry to the other monuments too.
Ropeway - 75 Rs